OZ magazine - both the Sydney and London editions which appeared between 1963-73 - was graphically intense, driven in large part by the art director Martin Sharp and a coterie of artists brought on board to assist with various issues. One outcome of this visual dynamism was the variety of posters issued in association with the London edition between 1967-71, though a couple of posters were also produced for the Australian version between 1964-6. As an example, a special poster which very much reflected the influence of British turn of the century artist Aubrey Beardsley was produced by Sharp in February 1967 to announce the first number of London OZ. The production of posters continued right through to the latter editions of the magazine, with a poster of Janis Joplin included with OZ magazine No.36 in July 1971, by which time Sharp was no longer actively involved with the magazine, having returned to Australia in 1969. The numerous posters issued with OZ were presented in  a variety of sizes and format, including foldouts bound into the pages or as the covers; loose supplements; or as part of the mail order posters available from the firm Big O Posters of London, started by OZ worker Peter Ledeboer and with assistance from Martin Sharp. The following is a list of posters produced in association with OZ. It does not include the Big O posters produced by Sharp in 1967 and 1969-70 - these are listed on the Sixties Sharp blog. Smaller artworks in the magazine are likewise not identified here.

Screenprint, signed and dated "'64" in ink below image, annotated and signed with Hogarth Poster Show exhibition date "6.1.81" in ink on frame front and verso, 53.5 x 38cm. Sold by Josef Lebovic Gallery. Printed in Sydney. This is a framed poster from Sharp's own collection, promoting OZ magazine and featuring the cartoon character Dick Tracy. No other copies of the poster are known, and Sharp makes no reference to it in later interviews. Fellow OZ editor Richard Walsh noted in a conversation with the present author during 2015 that "there were numerous posters" issued in association with Sydney OZ, however he did not provide any detail at the time. 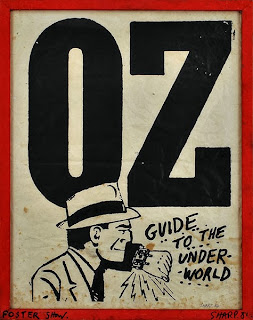 2. Martin Sharp, God bless dear Daddy who is fighting the Viet Cong and send him OZ - 1966.
Screenprint. Sold for 2/- through OZ magazine and advertised therein. Printed in Sydney. Based upon an original World War I Australian recruitment poster by Norman Lindsay. A copy of this poster is known from the black and white photograph by Robert Macfarlane of OZ editor Richard Walsh sitting in the OZ office sometime during 1969, and also within an article on Sharp published by Greg Weight wherein the poster is reproduced in colour. 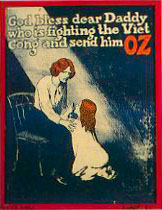 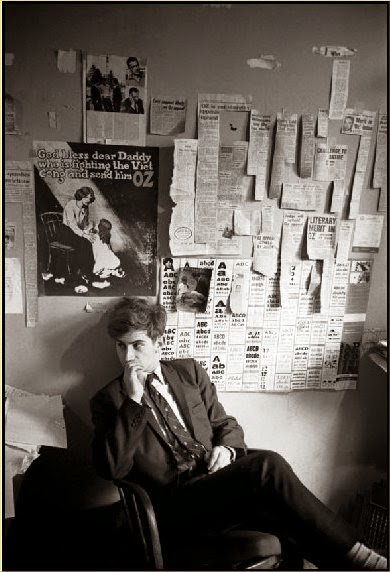 Richard Walsh in the OZ office, Sydney, 1969. Photograph: Robert McFarlane. Note the God bless dear daddy poster on the wall behind him.


Screenprint, 20 x 30 inches, black and red ink on white paper. Printed in London. This poster was issued in February 1967 to promote the release of the first issue of London OZ. Artwork by Martin Sharp, with his characteristic smiling red-lipped and toothy mouth surrounded by text in the style of turn-of-the century British artist Aubrey Beardsley. The use of the text "OZ is a new magazine" was carried over from the Sydney edition.

Foldout internal poster issued as part of the rear cover of the magazine and comprising a caricature of Unoted States President Johnson. It is critical of his support for the Vietnam War. Artwork by Martin Sharp and similar to his portrayal of Johnson within the Sydney edition of OZ, wherein Johnson is presented as a cowboy riding a B52 bomber. This was a large, foldout poster included on the rear of the cover of the second edition. Artwork on both sides was by Martin Sharp.

Foldout internal poster over 3 pages as part of the rear cover of the magazine. Psychedelic artwork by Martin Sharp in bright pink and blue dayglo colours and featuring typically Surrealist disembodied eyes and lips.


Font cover foldout poster by Michael English and Nigel Waymouth, known as Hapshash and the Coloured Coat. Original copies are known that are not folded or stapled. The poster was later reprinted by Big O Posters, without the Martin Sharp tarot cards (see below) on the rear.


Rear of the fold out cover plus carry over on the last page of the magazine. Comprises 22 tarot card images by Martin Sharp, being the major arcana series.


Artwork by Martin Sharp. The ethnographic head featured on this poster is also seen in Sharp's Legalise Cannabis poster produced for Big O Posters Ltd. around the same time. A variant using blue and gold inks is also known.

Artwork by Martin Sharp. A simplified variant of the OZ Number Four promotional poster, this was subsequently offered for sale by Big O Posters.

11. Martin Sharp and Robert Whitaker, Plant a Flower Child / OZ magazine no.5, July 1967.
Artwork by Martin Sharp. Photography by Bob Whitaker. The poster forms one complete side of the issue, with text on the other side. The original poster was in yellow with text in red. This version is rare. The majority of extant copies are in dark purple-pink.  It was also later issued as a single poster  by Big O Posters. A version in light brown is known, printed by Sharptone Litho Ltd., London, in 1967. The size of that poster was 76.5 x 114.5 cm. 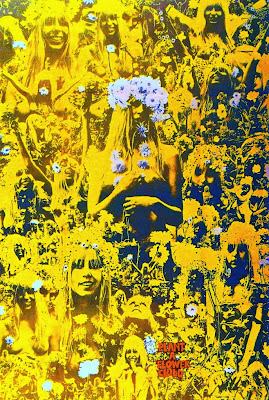 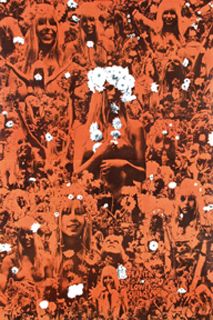 
Two-sided poster printed separate to the magazine. Note that the name of the revolutionary was not spelt correctly - it should have read Che Guevara.


Internal, single page poster. Artwork by Martin Sharp. Similar in style to Sharp's Wheels of Fire album art (August 1968) and the Sunshine Superman and Live Give Love posters of 1967. Internal foldout poster. Artwork by Barny Bubbles and David Wills. See the following blog pages for a discussion on the origin of this and the following poster:


Internal foldout poster. Artwork by OZ magazine no.4, June 1967. The front cover foldout poster is by Michael English and Nigel Waymouth, known as Hapshash and the Coloured Coat. 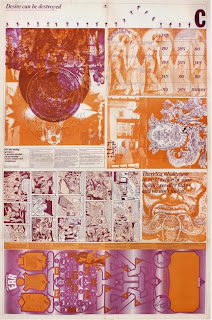 
The foldout poster forms the cover of the magazine. Artwork by Michael English and Nigel Waymouth, known as Hapshash and the Coloured Coat. The rear is an advertisement for Big O posters.


Promotional blacklight poster printed on vellum and/or paper. Image similar in part to the inside cover of OZ magazine number 13, June 1968. Artwork by Martin Sharp and John Hurford.

A silkscreen version of the Martin Sharp Jimi Hendrix poster with the lettering 'OZ is here' across the top in white. Used to advertise the magazine in shops where it was available. 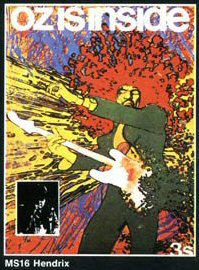 Foldout poster. Issued to mark the death of Jimi Hendrix in London on 18 September from a drug overdose. 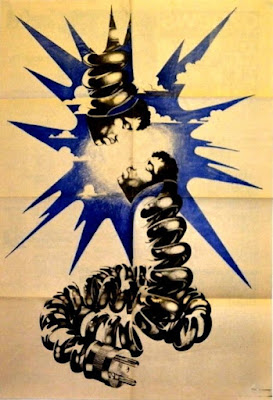 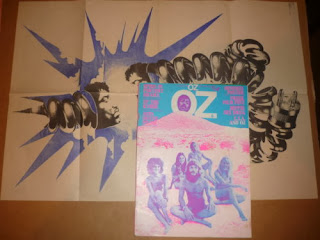 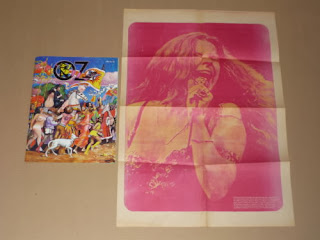 Poster issued to announce the final issue of OZ in 1973. Includes a variant on the photograph which appeared on the cover of that issue.